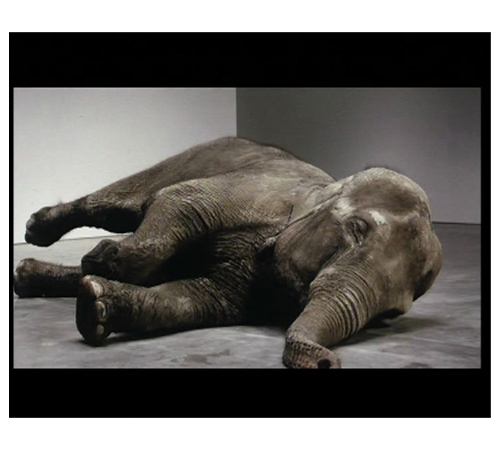 Videos by Sergio Prego and Douglas Gordon from the collections of  Angel and Clara Nieto and Cal Cego screened at Ca la Maria in the context of Loop 2015.

Elective Affinities. The meeting of two collections takes its title from the novel Die Walhverwandtschaften (1809), in which Goethe used chemical affinity as a metaphor applicable to human relationships. In the present case, the elective affinities have to do with the sharing of points of view, visions of things, the taste for certain artists and the desire to create unique projects and the choosing of particular travelling companions. Roser Figueras and Josep Inglada, artificers of Cal Cego (www.calcego.com), a contemporary art collection with no fixed abode but a firm commitment to participate and collaborate actively with a variety of other agents and artistic initiatives, have extended an invitation to Ángel and Clara Nieto, collectors based in Madrid and Berlin and the only begetters of the project A Window in Berlin (http://awindowinberlin.com/), a platform for video works by Latin American artists, who hold screenings in an old shipping container in public spaces in Berlin. The aim of this invitation is to establish a dialogue between videos from the two collections.

The work of Sergio Prego (San Sebastián, 1969) explores the notion of the sculptural through the expansion of the concept of sculpture in space and the amplification of the relationship with the body. Performativity plays an essential part in his discourse. In Cowboy Inertia Creeps, we see the artist crawling over urban structures in different cities. In this video, Prego defies the laws of physics, just as in previous works he has sought to liberate the human body from all kinds of rules and restrictions.

One of the lines of work explored by Douglas Gordon (Glasgow, 1966) places the performative self in front of the camera to evidence dichotomies and conflicts, which often derive from conventions. In the case of Play Dead, Real Time (other way) the protagonist is a trained Indian elephant, performing in the empty space of an art gallery: following the instructions of her trainer she stretches out on the floor to play dead, a position that is quite alien to the animal’s natural habits and inclination.

As well as being by artists from the same generation, and having been produced in the same year, 2003, both videos share a performative element, an exploration of the body that sets out to break the rules in relation to the space in question, and a technical use of the medium of video that both explores and manipulates its potential: in the case of Prego, it is the sequence of still images that creates the sense of action and movement, while Gordon reverses the temporal direction of the sequence so that instead of showing an elephant falling to the ground he presents it rising to its feet with remarkable agility.

Elective Affinities. The meeting of two collections is being shown at Ca la María from 28 May to 6 June, between 5.00 and 8.00 p.m., as part of the Loop Festival.

BEYOND OBJECTS? A debate of Engaged Attitudes towards collecting. A conversation with Angel & Clara Nieto. Friday 5 June 10 am – 12 am. Carrer Pelai, 28. Barcelona
http://loop-barcelona.com/loop-barcelona/loop-studies/panels/