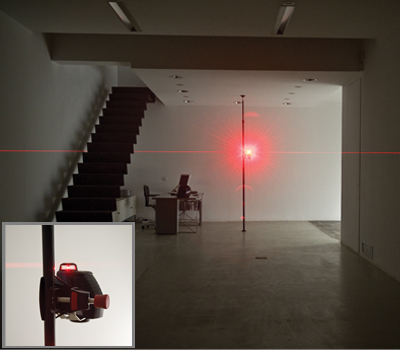 With One Second of Horizon Wilfredo Prieto initiated a series of pieces in which he explored the genre of landscape from his own perspective. It was the centrepiece of the exhibition Negro, Mate, Seco/Black, Matte, Dry, presented at the Nogueras Blanchard gallery in Barcelona in 2009. On entering the space we found various objects that could be used in the construction industry: a flashlight, a helmet, a match or a level. It is this last element that produces One Second of Horizon — a laser line of 360° that is traced on the walls of the exhibition space, evoking an evening landscape, and embracing all of the other pieces. As people entered and walked around the space, there would be a moment when the laser hit them in the eyes and dazzled them, creating a parallel with that second in which we observe the rising or setting sun.

The laser level is set up in plain view, at random. The artist recreates a symbolic landscape that is also an environment which places the audience in a work setting, in an ‘in pass’ between the previous action and an action yet to come. It feels as if something has been left half done, or something is about to begin. As in much of Prieto’s work, the poetic play arises from the conceptual shock produced by juxtaposing two radically different realities. On the basis of construction materials and their positioning in the space and the viewer’s reading of these a landscape is created. It could be said that one of the basic elements of Prieto’s approach is the imagination, used as a driving force of creation and as a spring through which the eloquence of the gesture generates new moments and spaces. By way of these minimal gestures of maximum impact Prieto generates new readings and unexpected interpretations that subtly break with the standardized and normative.

As in most of his works, the artist here assumes the role of an observer of reality, an explorer and researcher of the everyday, his function reduced almost to pointing out and highlight certain aspects of the world, modifying their significance by means of small gestures that dislocate the perspective of reason. Prieto seems to intervene less and less in his work, in order to leave more room for the viewer. Since this work, Prieto has continued to explore the landscape tradition with works such as Constructivist and Deconstructivist Meadow Seen from the Sofa at Home with One’s Feet on the Table or Landscape with the Fall of Icarus, both from 2011. In these works he is once again in the realms of those personal landscapes fashioned from everyday objects taken out of context, which prompt us to imagine possible new scenarios.
Juan Canela