(The Distance Covered in Choosing Vasari’s “Lives of the Artists…”), 1994 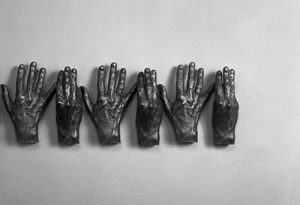 This sculpture belongs to the “Minor Measures” series, which represents a key moment in the artist’s career given that it corresponded to the transition between a long and intense period as a sculptor and his incipient interest in audiovisual media. As a result of a six-month stay at the Banff Centre for the Arts in Canada (an international reference point when it comes to creative research into new technological media), Antoni Abad made the transition from sculpture to video in one and the same project, conserving however, a single conceptual objective. As a logical consequence of his previous work, in which he employed tape measures, Abad initiated his “Minor Measures” project in which the object was to obsessively measure all of those actions carried out throughout a single day, which he describes in the following terms: “The distance travelled in waking up, getting up… lighting up a Chester… enjoying a coffee, returning to the studio… counting up the distances in hands, walking back a few paces, observing the result… entering a bookshop, waiting my turn in the queue, browsing through the books on display, choosing Vasari’s The Lives of the Artists… turning off the television, reading some pages of Vasari, setting the alarm clock, turning off the light and going to sleep on the 11th of August, 1994”.

After making this decision, Abad presented a video installation in which we see his hand measuring (in hands) one of the walls of the room in which the film is being shown, a long neon line above which a list of everyday actions is inscribed and a series of moulded sculptures in aluminium, also of his hand, which is visualised as a series of open and closed palms, the distances covered in carrying out some of these everyday actions described by the artist.

First, it is necessary to point out that like in some of his other works, we are left feeling that we are being presented with a project of practically unfeasible dimensions. Converting all of these day to day actions into measurable distances based on aluminium hands would be almost impossible, as it would for his video “Ego” to be made in every possible language that exists on the planet. At the same time, it is also true that some of these proposals are close to conceptual initiatives more appropriate to the 1970s, when, for example, On Kawara insisted on obsessively painting the date of the day on which he painted a painting, in a tautological twist that gives those works power precisely because of the determination and consistency behind these unattainable feats.

The “Minor Measures” series takes as its starting point an observation of immediate reality. This is something that has always been present in his work –– a simple attention to detail –– but it is also one that he has been making more and more complex as he investigates new technological media and their creative possibilities, all of which meant that this was one of the last sculptures that he made before definitively turning to video and lately to the numerous creative possibilities offered by the latest generation of mobile phones.