Ro Caminal’s investigations in the visual arts have been marked from the outset by what happens at the borders, in the textures of experience, in that liminal zone in which the modes of representation and perception of the Other come into play. Her artistic practice has constantly sought to trace undisciplined relationships between art and anthropology, research and experimentation, exploring various ruins of the singular which are what articulate our present.

As a general rule the processes of historical construction of images place themselves in the service of certain significations to mark out territories, to conquer, build up, destroy, instrumentalize and legitimize certain actions, unifying intensities and pacifying differences. In contrast, from her explorations of the audio-visual, although also at times with mixed-media installations, Caminal, transposing diverse methodologies, from a collaborative and participatory approach to production, opens up spaces where those who are excluded from the right to occupy the image itself can share the power of enunciation, have a voice. Forms of fragile interruption, moments of tension not exempt from the contradictions this gesture implies, yet without renouncing the power of those bodies that resist and insist.

Her work has been shown in numerous collective and individual exhibitions in institutions in this country and abroad, of note among which are the International Biennial of Video Art and Animation (Puebla, Mexico), the 2016 TIVA/Taiwan International Video Art (Taipei City, Taiwan), Kino Palais (Buenos Aires), Artellewa Art Space (Cairo, Egypt) and Galerie Éthiopiques (Saint-Louis, Senegal).

In the imaginaries and ceremonials of the artist Antoni Miralda, small-scale domestic tasks and large constructions in the public space are creative processes of the same intensity. In much the same way, his physical displacements make him a nomad, while his alchemy of colours and flavours bestows on him a shamanic identity rooted in place – places; a hard-to-classify artist, an anomaly that gives him the highest privilege when it comes to eroticizing delicacies and delighting in gastronomic encounters.

He was born in Terrassa (Barcelona), a place of ​​textile factories and densely woven social fabrics. He travelled and settled as a young man in the Paris and New York of the Seventies, where he energized the processes of his highly individual aesthetic warp and weft and his relational scenarios. He has always guided his works and collaborations like an anthropologist, a way of working far removed from solipsism. For Miralda, art is a stove on which you can cook and a table to be shared. The furniture of this unusual artist’s studio is rich in Pop reminiscences and magical chiaroscuros: cannibalism, aphrodisiac delicacies, organic fruits, martial miniatures, colourful advertising icons, cookery books, pagan weddings, videos, grandmother’s recipes and virtual museums.

His productions, unclassifiable and as such indispensable, have been shown and taken place in leading museums in cities and international events around the world. A wealth of publications disseminate the works and analyze his creative spirit. Together with Montse Guillén, he runs the FoodCulturaMuseum life project, a museum at the mercy of the elements, without time or coordinates. A project for eternity.

In 2018 Antoni Miralda was awarded the prestigious Velázquez Prize for his incomparable way of working the concept of ritual and party in a playful and participatory manner, with an emphasis on the political and critical nature of his works. In other words: the artist knows that bread is more important than money, and friendship more than success. 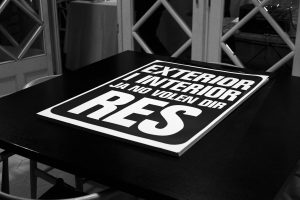 NON SERVIAM [GETHSEMANE] is a specific mise en scène of a performative character which takes as its point of departure the obtaining of olive oil from the press. On the basis of this process and the resulting production of the oil a link of an almost abstract nature is established with ‘The Desiring-Machines’, the first chapter of Gilles Deleuze and Felix Guattari’s Anti-Oedipus. In an exercise of appropriation, this text is used to elaborate the script of a sound work which articulates the different parts of the project and its extension as a limited-edition graphic work.

Starting from the commission to develop an artistic project on the basis of a very specific element, olive oil, Joan Morey incorporated that element into his discourse and his research work in the field of performance, in which he explores how we relate to others and how relations of power and subjugation are exercised. The notions of non serviam (the words attributed to Lucifer in his refusal to serve the God of the heavenly kingdom) and of Gethsemane (from the Aramaic word for an oil press, the name of a garden on the Mount of Olives in the Cedron valley, in the east of Jerusalem, considered a sacred place) are, together with a number of passages from the first chapter of Deleuze and Guattari’s Anti-Oedipus, ‘The Desiring-Machines’, are the articulating axes of a performance in which actions and aesthetic elements associated with erotism and sadomasochism appear, and in which oil is present as a liquid lubricant of bodies and machines. The whole is governed by ceremonial patterns of exquisite elegance which contrast with the brutality of the concepts on and around which it reflects.

GETSEMANÍ [GETHSEMANE] by Joan Morey was an event produced by CAL CEGO. Contemporary Art Collection which took place in December 2014 on the occasion of the presentation of the new olive oil.

NON SERVIAM is a hors commerce limited-edition graphic piece printed by offset lithography in black ink on white Pop’Set paper (Antalis) containing the script of the event based on ‘The Desiring-Machines’, the first chapter of L’Anti-Œdipe. Capitalisme et schizophrénie (Paris, Les Editions de Minuit, 1972), by Gilles Deleuze and Felix Guattari.

Joan Morey has produced an extensive body of performances, videos, installations and sound and graphic works since the late nineties that explore the intersection between theatre, film, philosophy, sexuality and subjectivity. His work embodies and at the same time criticizes one of the most refractory and most transcendental aspects of human consciousness and behaviour: how we relate to others, be it as oppressed or as oppressors. The dark and ominous tone of his work must be seen as a reflection of a universal human history characterized by domination, exploitation and inequality.

His art practice combines three fundamental genres of contemporary art: performance (in the form of scenarios that develop over time, in which human bodies and the audience have usually been involved), appropriation (taking and reformulating existing texts, forms and styles from literary sources, whether classical or from contemporary subcultures) and institutional critique (with which it engages and examines the ideologies and the power of our social, cultural and political institutions).

Morey makes use in his work of the whole spectrum of rhetorics to be found in the mise en scène, the actors, the objects, the costumes, the scripts and the spoken word. Not himself a performer in his performances, he establishes the rigid instructions that define the formal parameters the performers must respect (or suffer), effectively determining how the audience perceives the works and the precision with which these must be documented.

Joan Morey was born in Mallorca in 1972 and lives in Barcelona. He holds a BA and a DEA in Fine Arts from the University of Barcelona. In 2017 he presented the performance TOUR DE FORCE at the Centre de Cultura Contemporània de Barcelona and the screen performance COS SOCIAL. Lliçó d’anatomia [SOCIAL BODY. Anatomy Lesson] in the context of the Premi de Videocreació awarded by the Xarxa de Centres d’Arts Visuals de Catalunya, Arts Santa Mònica and LOOP Barcelona. That same year he was awarded the Premi Ciutat de Barcelona de Artes Visuales by Barcelona City Council. In 2018-2019 he presented COLAPSO, an awarded project in two exhibition chapters (at the Centre d’Art Contemporani de Barcelona Fabra i Coats, and at the Centre d’Art Tecla Sala in L’Hospitalet); and a performance in the Model prison in Barcelona, ​​this being the first occasion on which the protagonist was not bodies but the panoptic architecture itself.