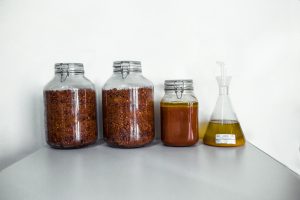 Pep Vidal is a scientist as well as an artist, and carries out his artistic work in the space of intersection, convergence and divergence between the two ways of looking at the world. Infinitesimal changes and measurements are his primary starting points when it comes to defining his projects. One of the things that the realms of art and science have in common is curiosity, the tendency to set out from a concrete question or questions. Oli d’una olivera (Aceite de un olivo) [Oil from an Olive Tree] has its origin in a question which may seem naive, but for that very reason served to initiate a fascinating process of investigation: How much oil does an olive tree yield? The process that has led to the realisation and final form of the project is very similar to that by which oil is produced. If the production of oil involves a filtering of residues, the production of Oli d’una olivera (Aceite de un olivo) [Oil from an Olive Tree] entailed a filtering of ideas and variables.

At the beginning of the process, Vidal focused of the importance of monitoring and controlling production, taking this principle to the extreme: why not maximise the oil yield and minimise the size of the tree that produces the olives? As a response to the questions ‘how much oil does a bonsai olive tree produce?’ and ‘how much oil does a normal olive tree produce?’ he related a specific olive tree, growing in the Baix Penedès region, and a bonsai olive that he bought. The artist had previously carried out other projects relating the sizes of different objects or systems which have certain similarities and differences: we might recall f (t) = f (t-t°) (curated by Marina Vives in the Capella de Sant Roc, Valls, 2015), in which he planted an eight-year-old bonsai on the area of land it would need if it had not been cultivated as a bonsai, or Un humilde calcetín [A Humble Sock] (Fundació Tàpies, 2014), with its scale replica of the Tàpies sock reduced to a size of 20 microns, among others.

Ultimately, the most significant aspect of the comparison – or to put it another way, the nexus that links the full-size and bonsai olive trees – is artifice: the artifice to which the bonsai is subjected in order to control its size and the artifice to which the olive tree is subjected, planted in a particular environment in order to produce the olives that will give oil, an oil that is close related to the origin.

Measuring was and is the essence of the project, but measuring also entails the impossibility of absolute precision. Having discarded the option of a conventional pressing of the yield of a single olive tree, the alternative was a manual, homemade, do-it-yourself pressing, out of which, as in every experiment, came the discoveries: the residues, the solids and the liquids. The most valuable thing, the oil, is calibrated and weighed with the greatest possible precision and professionalism and duly certified, but unlike traditional production, in Pep Vidal’s process the residues are not eliminated but retained the final result, because the residues are also part of what comes from the olive tree, which is this case is not any old olive tree but a very specific olive tree, an Olea europaea growing in the Baix Penedès.