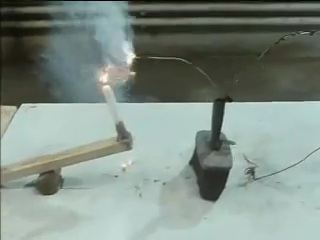 A chain reaction is a sequence of events, each caused by the previous one. It is also the name given to a chemical reaction in which the product of one event is the reactant in the next, and so on. A chain reaction implies a certain energy input, which generates an expansion of events. A chain reaction can be triggered by small impulses yet eventually generate vast transformations. Similarly, a chain reaction can be used to establish new references or new relations; in short, to contribute to new ways of looking, thinking and acting. A video programme can also be seen as a chain reaction, one in which the first shot leads us on to the next so that our viewing of it is necessarily influenced by the preceding series of images, as well as by those that follow. Chain Reaction is the title given to this programme of videos, which brings together a selection of films from the Cal Cego Contemporary Art Collection. Cal Cego is a collection based, not on media or formats, but on artists and discourses. The Cal Cego Collection contains videos, projections, video-installations, photographs, installations, drawings, paintings and works in other formats more difficult to classify. Cal Cego is not based on fixed, immovable, pre-established cartographies of artists; its aim is, rather, to work as a compass, guiding the production of meaning. It is from this standpoint that a contemporary art collection can also be seen as a chain reaction in which genealogies of artists, works and discourses are generated, genealogies that cannot be read without taking into account the relations, associations, counter-positions, overlaps, revisions and even conflicts that they generate with each other. The Chain Reaction video programme begins literally with a chain reaction, one created by the Swiss artists Fischli & Weiss through everyday objects. It continues with Ignacio Uriarte’s unusual choreography performed by files on shelves, followed by a definition of the self in relation to others in a video by David Shrigley and the performance of an animal obeying orders in Douglas Gordon’s film. Still on this animal theme, we come up against a pack of dogs face-to-face as Francis Alÿs uses his video camera to take us into the field of art. Christian Jankowski explores similar terrain as he converts spectators into sheep. Next, the art system is presented with acute vision and humour by Jesper Dalgaard and, finally, Bestué/Vives deliver yet another chain reaction, in this case one full of artistic references, without leaving the everyday, domestic sphere.

Fischli & Weiss, Der Lauf der Dinge (The Way Things Go), 1987, 6’ excerpt (total running time: 30’) I
n their work, Fischli & Weiss transform aspects of ordinary life in the most extraordinary ways. They take a fresh, new look at everything that goes to form the everyday universe, infusing it with unexpected vitality and significance. Their video Der Lauf der Dinge documents a long sequence of small actions triggered by everyday objects. The artists turn these objects into strange artefacts capable of generating completely homemade special effects. Their strange machinery is installed in a warehouse some thirty metres long and is made from such materials as tyres, rubbish bags, step-ladders, teapots, soap and oil and petrol cans, amongst other things. Fire and fireworks are the catalysts, setting in motion processes in which the objects are made to fly, crash and explode in the studio.

Ignacio Uriarte, Archivadores en archivo (Files on File), 2007, 8’21”
Ignacio Uriarte’s work, which the artist himself has defined as “office art”, is based on the use of tools and methods similar to those employed by any office worker as part of their everyday routine, and routine is, indeed, Uriarte’s main theme, whilst his style is clearly influenced by conceptual and minimalist art. In Files on File, files move on their own on the shelf, forming different patterns and rhythms. Firstly, they recreate their own habitual movements, but they then go on to perform more complex, playful choreographies that break the stationary nature of furniture.

David Shrigley, Who I Am and What I Want, 2005, 7’
Acutely aware of the absurdity of everyday life, David Shrigley chronicles the modern age. The world he portrays is strange, entertaining, and sinister. His main characters tend to be odd types, sociopaths, cruel yet at the same time likeable as they confront situations framed in strange logics, situations tinged with fear, phobia, love, cruelty, even tenderness. One such is Pete, the disturbed protagonist of the animated film Who I Am and What I Want, which Shrigley made in collaboration with Chris Shepherd. Pete tells us about his life, his dreams and his desires. We learn about a life full of excess that has left Pete no choice but to opt out of the rat race to live in the woods with the animals. In Who I Am and What I Want, the strange becomes normal, and the ordinary gives way to the extraordinary.

Douglas Gordon, Play Dead; Real Time (Other Way), 2003
Douglas Gordon’s work explores the idea of the image and its profound capacity for fiction, seduction and deceit, as well as for building collective imaginaries. Minnie, a four-year-old elephant, stars in the video Play Dead; Real Time (Other Way). To make his film, Gordon arranged to have Minnie brought to New York City’s spacious Gagosian Gallery. There, the animal carried out different tricks at her trainer’s command: play dead, stand still, walk around, and so on, and all these movements were duly recorded. The result is a silent film constructed from many different takes, each fading to black, in which the director explores such themes as learned behaviours, role play and the art system itself.

Francis Alÿs, El Gringo, 2003, 4’
Walking, wandering, the idea of going from one place to another unhurriedly and with no need to pursue any particular objective: this is the starting-point and central theme behind most of Francis Alÿs’s work. Alÿs is an artist who records his experiences and everything that occurs to him on his walks and journeys in drawings, videos and diaries. As a result, these walks become short fables, to quote the description used by Carlos Basualdo to describe them. In them, fiction and reality become fused, truths are only half true and the veracity of reality is questioned. In El Gringo, the viewer becomes one with the camera, taking the lonely path near Mexico City to run into a group of dogs that become more and more aggressive. Alÿs uses the camera as a shield, placing it between himself and the dogs, making the viewer feel part of the scene whilst also protecting himself. As the artist himself explains in an interview with Hans-Ulrich Obrist, the camera is nothing more than a pretext for taking that path, a way of justifying his presence there.

Christian Jankowski, Flock, 2002, 12’
Christian Jankowski is fascinated by communication in all its different facets. His collaborations – usually engaged in very much on a playful basis – with different types of people (media astrologists, couples with relationship problems, amateur actors, tele-evangelists, etc.) and his habit of infiltrating different fields and spheres of activity are essential elements in projects in which the artist sets in motion or acts as the catalyst in processes that seem to develop independently. The video Flock forms part of a trilogy entitled The Magic Circle, in which Jankowski explores the relations between the artist, the gallery as “institution” and the visitor or audience. Whilst in My Life As a Dove (1996) a magician converts Jankowski into a dove and in Director Poodle (1998) the director of an institution is transformed into a boisterous white poodle, in Flock (2002) visitors to an exhibition are turned into sheep. In this way, then, does Jankowski complete the “magic circle” in which he explores the relations between the artist, the institution and the viewer.

Jesper Dalgaard, Helen Vejen runt og tilbage igen (All the way round and back again), 2005, 5’
Jesper Dalgaard’s video is a tragic-comic tale of a young artist searching for fame and fortune. The world we see in this animated film contains certain futuristic elements (flying cars, for instance) that we have already seen in previous works, particularly his sculptures and architectural models. In fact, Dalgaard’s artistic universe is like a personal galaxy with highly specific rules and codes underlying short narratives that explore such universal themes as love, hate and doubt.

Bestué/Vives: Acciones en casa (Actions at Home), 2005. 15’ excerpt (total running time: 33’)
Actions at Home is the continuation of a previous work, Acciones en Mataró (Actions in Mataró), the “actions” taking place this time within the confines of a flat in Barcelona’s Eixample district. The video features a series of highly spontaneous scenes in which the artists themselves perform more than one hundred improbable, absurd or simply impossible actions. Something of a narrative impulse runs through the entire video, providing a certain logic to the sequence, as one action leads to the next. Many of these actions clearly allude to key references in recent art history, and the video contains visual comments on iconic 20th-century works from Jean Tinguely to minimalist and conceptual art, as well as an allusion to Fischli & Weiss’s video.